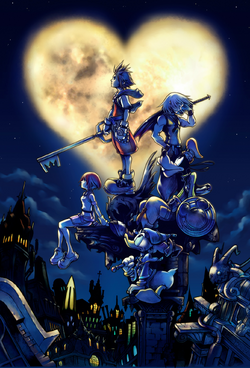 Kingdom Hearts is a 2002 film game made together by Square and Disney. Mixing playwork with liveliness, as well as hoads from two unsame roots, it was much herried and widely played in its time. In short, the tale is about a young boy named Sora, who bands with Donald Duck and Goofy to fight the evil beings of darkness. The game earned many afterfollowings.

The game, as well as its afterfollowings, is set in a wide network of linked spots called worlds. They are many and there are mainly two kinds of them: worlds befolked by Disney hoads from Disney films and worlds befolked by other hoads (for byspel, by those from the Final Fantasy games).

Hoads in the game are made of three bits: heart, soul and body. The body works as a vat for the heart and soul, with the soul giving life to the body. The heart holds their bemindings, and gives them feeling, light, and darkness.

Three young friends, Sora, Riku and Kairi, plot building a raft to leave their home world Lot Islands and get to know new worlds. One night, the islands are raided by evil beings called the Heartless, and Riku and Kairi melt away. At the same time, Sora gets the Keyblade, a weapon made to fight the Heartless. However, the islands are shattered and Sora drifts into room. Meanwhile, King Mickey has left his own world to deal with the rising lot of Heartless, and leaving behests for Donald and Goofy to find the "key" that will shield the worlds from the clutching darkness.

Donald and Goofy use the Gummi Ship to reach Across Town, where Sora has drifted. After Sora meets Donald and Goofy, the three choose to fare together—Donald and Goofy to find King Mickey, and Sora to find Kairi and Riku. The three go to many Disney worlds, finding that the Keyblade also locks "Keyholes" in the worlds that, when sealed, stop the "heart" of those worlds from being eaten by the Heartless. Meanwhile, a band of Disney nithings led by The Evil Queen seeks out the seven Princesses of Heart to unlock the last Keyhole, which leads to Kingdom Hearts: a keepspot of knowledge and might, and the birthplace of all hearts.

Retrieved from "https://anglish.fandom.com/wiki/Kingdom_Hearts?oldid=45935"
Community content is available under CC-BY-SA unless otherwise noted.