This beworked runestaffhoard(lower) has a staff for every din in today's English. 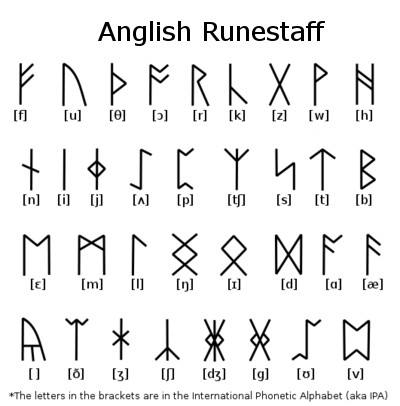 The upper Runestaffhoard is the staffhoard used to write Old English.

As the goalwork is yet unfinished, below lie two listings of dins our runestaff might have. Understand that the runes, throughout eretide, have woven many unlike dins. Thus, we may be soothed by our own whims. Let us then build a runestaff which thereafter can be brooked broadly by other Theedish tongues. The twithe board is not blan either (I bid, if thou canst, give not the runes heathen names).

Another Naming as followed Edit

*A suggested name ought to be a close as possible to its original meaning, while still containing the sound its used for somewhere within the name, preferably the very first letter.

**The name "thorn" is a Christianization of the original, Thurs or Thurisaz (Thor).

Feel free to bework the suggested name column as you please.

Retrieved from "https://anglish.fandom.com/wiki/Runestaff?oldid=54000"
Community content is available under CC-BY-SA unless otherwise noted.