Hi, welcome to The Anglish Moot! I'm a member of Fandom's Community Support team. Thank you for your edit to English Wordbook/C!

It looks as though none of the admins for this community are active right now, but if you need help, check out help pages or stop by Community Central to explore our forums.

You can also follow the Staff blog to keep up-to-date with the latest news and events around Wikia. And don't forget to check out Fandom University for quick how-to videos.

Please leave me a message if I can help with anything.

Enjoy your time at The Anglish Moot!

I tried to add a new infaring into the "D" section of ðe wordbook, and this happende:  The "twiwrit(calque)" thing is supposed to be in the "unattested words" box of the entry "digraph" Have you ever undergone ðis? And if ſo, hau do I fix it? I haven't nered it yet on ſwotel grounds!Ðæ Bronie Chriſter (talk) 18:36, October 13, 2016 (UTC)

The beginner of  the Moot is Bryan Parry (Oswax on the Moot),  whose webstead  Wrixlings   deals with things anglish.. Wrixling has a contact box through which you can reach him..  I am sure that he will be able to tell you about the  hows-and-whats of becoming an adminstrator of a Wikia.

I Wish to Inliven the Saxon Heart in Our Present SpeechEdit

Above are the words of Oswax Scolere, the founder of the Anglish Moot. His words say to me  that "Anglish" words were to come from Old English. Anglish words would be those inborn; borrrowed (the spoken and written words of OE between the years 449 and 1200, and maybe a little time thereafter, and put-togethers made up from OE wordbits). Yes, there are sibwords (cognates) that can be taken from other Germanic tongues; but Scolere's Anglish was not designed to be a pan-germanic tung  . Indeed the words 'war' 'cast' and 'camp' are both germanic and Anglish; but pledge*, tarnish, and engage, wagon  are germanic but not Anglish. Most likely  Calques* are found in every(?) tung?  and words like motherborough for metropolis and sailstone for magnet are true Anglish as their wordbits are Old English. Furthermore unattested words must have an Old English origin. Latterly, I have found Juggernaut from Hindi via Sanskrit listed as an unnattested word!

However having said all this, Anglish is different things to different folk, but attested or unattested words must have or have had an  OE life as fully-fledged words or  wordbits put together.  Came upon an OHG word 'hellirune'  not long back a  putting together of 'hell'  & 'rune' meaning one adept in the mysteries of hell; and (2) necromancy,  sorcerer. One would not find it in an English wordbook, but it is indeed Anglish.

If The Oxford English Dictionary tells me that "Big" is of  unknown origin.  Why would we include it in Anglish Wordbook?

I   had a look  at  Wiktionary before raising this matter with you.. If it's a choice between the authority of the Oxford English Dictionary and Wiktionary,  I would accept the OED without hestitation. The Moot was never intended to include words simply on the basis  that they are Old Norse. The creator (Oswax)  gave consideration to including Old Norse words , but decided  to include  only those   borrowed into  Old English before approx 1150.  My fear is that  the Moot will become a free-for-all Germanic conlang. 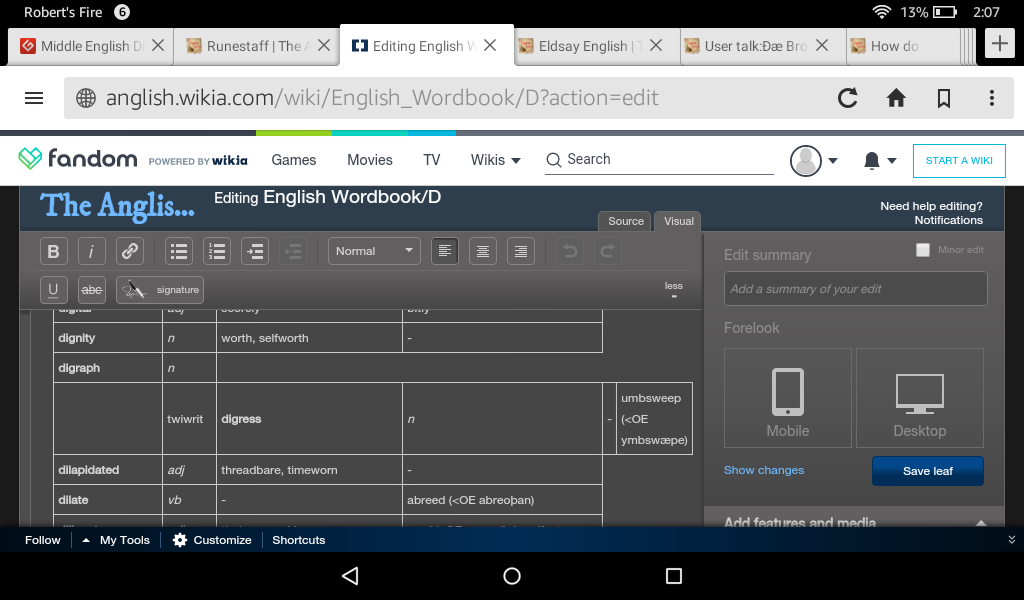 I have seen your asettings of  the forefastening "ur-" to "or-". I do see what you are seeking to do by brooking the older forefastening, but "or-" is no longer brooked and fastened to words anymore. I think today's "ur-" is a better pick between the two since folk would be wonted to it and more known to it than the older and lost "or-". "ur-" is also brooked more, more widespread than "or-", and fastened to words more. Yes, I also see how "ur-" is a little worring since it is of Theedish upbringings, and it is somewhat downheartening that it is borrowed straightly from them. At least it is Theedish like English is, but I do believe we should beweigh ourselved to go forward from the forold "or-". I share the same ache for the lost "or-".

Thank you for getting back to me. I like what you did. It should be up to folk about which ones they want to brook, and putting them both was a great thought. best of luck on afinding words!

Retrieved from "https://anglish.fandom.com/wiki/User_talk:Alfredikus?oldid=38749"
Community content is available under CC-BY-SA unless otherwise noted.